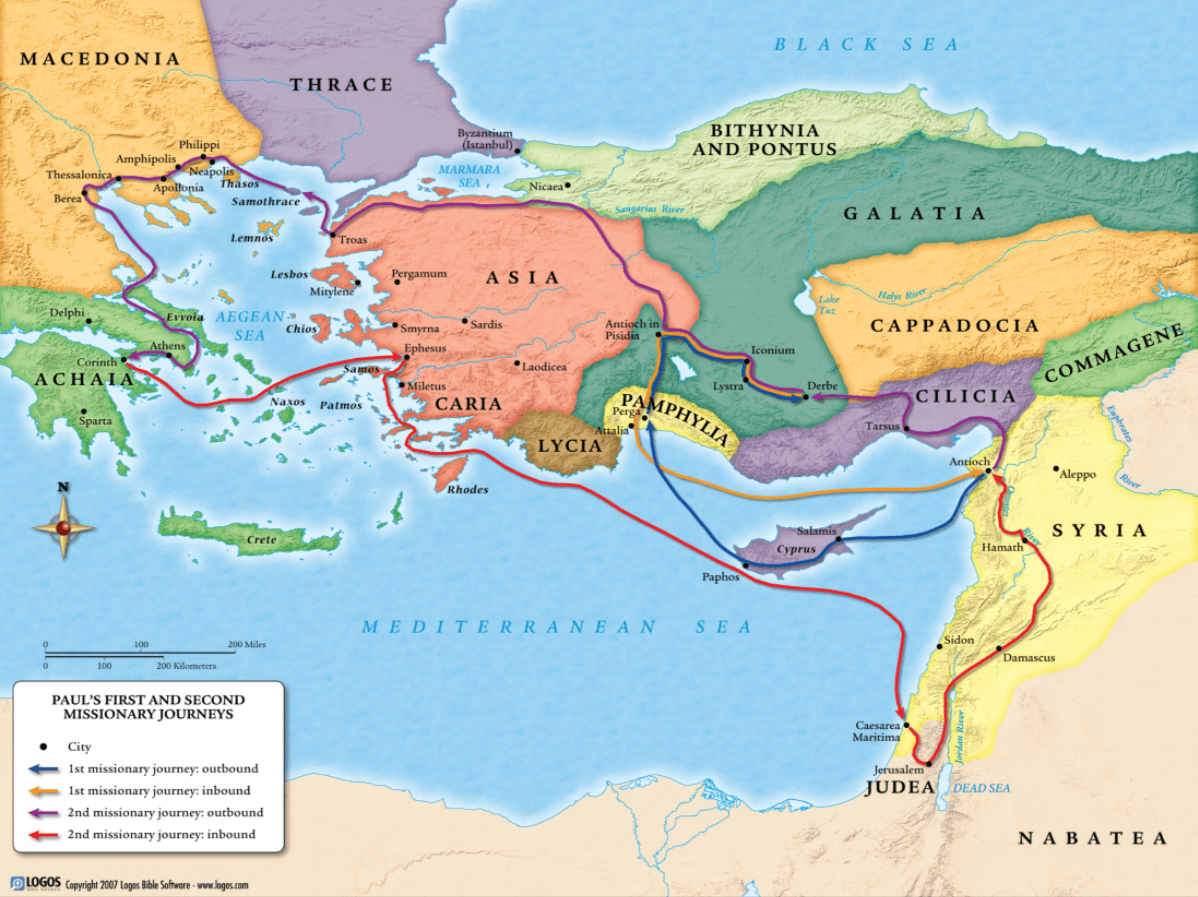 Who are the Galatians?

The geographic area called Galatia (see map) is part of modern-day Turkey.  When the apostle Paul goes on his first missionary journey (with Barnabus), they start churches in various cities in this region (Perga, Antioch in Pisidia, Iconium, Lystra, Derbe, etc.) These churches are the recipients of Paul's letter to the Galatians.  As background, details of Paul's first missionary journey (to Galatia) are:

The timeline of this first missionary trip is around the years A.D. 46-48.

Then Paul visits Jerusalem (the Jerusalem Council in Acts 15), after which Paul writes his letter to the Galatians around A.D. 49 (to the individual churches he planted on his first missionary journey).  A main reason Paul writes his letter to the Galatian churches is that those churches were succumbing to and listening to the judiazing false teachers undermining the central NT doctrine of justification by faith (Rom 3:31), specifically teaching that Gentiles must first become Jewish proselytes and submit to all the Mosiac law before they could become Christians.  Paul wrote his letter to counter that teaching, to defend justification by faith alone, and warn those churches of dire consequences of abandoning that essential doctrine.

That (above) is the framework of Paul's letter to the Galatians.  After Paul wrote that letter, he then traveled on more missionary journeys (see below).

Around AD 49-52, Paul goes on his 2nd missionary journey.   After initial disagreement between Paul and Barnabus about bringing along John Mark (who left early in the first missionary journey), Paul and Barnabus split -- with Barnabus taking John Mark via boat to Cyprus.   Then Paul takes Silas with him, departing Antioch and traveling north through Cilicia (city of Tarsus), through Galatia (cities of Derbe, Lystra, Iconium, Antioch in Pisidia).    Note: in Lystra, Paul meets Timothy - a young man who then travels with Paul and Silas, and to whom Paul writes later letters.    The three of them then continue on through Asia (see map) to the city of Troas, then sails across the Agean sea to the region called Macedonia and its cities (Neapolis, Philippi, Amphipolis, Apollonia, Thessalonica, Berea).  Then Paul sails to the region called Achaia (cities of Athens and Corinth) before he sails again to the region called Asia (City of Ephesus), and sails back to the region called Judea (modern day Isreal) to the city of Caesarea, then to Jerusalem, through Damascus, and back to Antioch.   During Paul's 2nd missionary journey he writes 1 Thessalonians and 2 Thessalonians from the city of Corinth.

Then around AD 53-57 Paul goes on this third missionary journey, where he writes 1 Corinthias (from Ephesus), and 2 Corinthians (from Macedonia), and Romans (from Corinth)

Then around AD 59-62 Paul goes to Rome and his first imprisonment (See Acts 27:1 - 28:31), writes Ephesians, Colossians, Philemon, and Philippians from Rome.

Then Paul travels to Macedonia and writes 1 Timothy, and writes Titus from Nicopolis (AD 62-64). Then Paul has his 2nd imprisonment in Rome (around AD 66-67) where he writes his last letter (2 Timothy) before Paul is martyred for his faith.